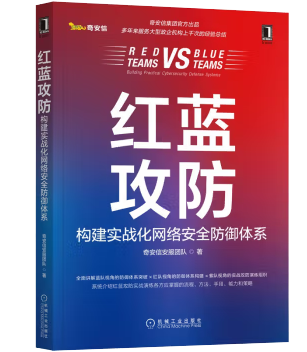 This is a book from the perspective of the red team, the blue team, the purple team to comprehensively explain how to carry out the red and blue attack and defense practice, is a summary of the experience of the Qi 'an principal service team for many years in the service of various large government and enterprise organizations.

It explains the four implementation stages, eight defensive strategies, five types of defensive means and five types of key equipment of the Red team's defense system construction, as well as the classic defensive cases from major government and enterprise organizations.

Team is a team offensive and defensive technology as the core, under the big, the cloud data is focused on the threat detection and response, advisory planning, threat detection, offensive and defensive drills, sustained response, warning notices, safe operation and a series of actual combat service capabilities, can provide customers with the whole cycle security services professional network security and emergency response team.

The team is the leading security service team in China with a business scope covering the whole country. The service objects include network security regulators, leading enterprises and industry units in various industries and fields such as the Party and government, finance, operators, energy, central enterprises, media and civil aviation.

The team has a Stargazing laboratory team that focuses on Internet application vulnerability mining and attack and defense research, and a Z-TEAM team that plays an important role in actual combat attack and defense drills and is good at organizing and implementing penetration attacks, providing strong technical support for network security services. Z-TEAM has developed several sets of practical technology warfare methods and supporting tools in the continuous exercise of real network confrontation. Especially in the aspects of Web attack and defense, social worker penetration, Intranet penetration and simulated APT attack, the team has solid technical strength and flexible technology warfare methods, and its actual combat ability is highly recognized by the industry.